August 25, 2013
If there is one thing I pride myself on remembering really well, its names. You could be saying “Oh remember that guy from 3rd  grade.. the one who was always chewing pencils… who had a blue cycle..” and pop would come out my answer before you even finished your sentence. But now-a-days I can’t freaking remember the names of any of the singers from bollywood! Each movie has three singers for a single song, and about nine songs in an album with almost all different singers… so you do the math!Gone are the days when you could close your eyes and listen to the song for three seconds before deciding if it was Shaan or Sonu Nigam or Kumar Sanu (And where have they all vanished now???).
Songs that were ‘hits’ remained so for a substantial amount of time and not just a week or two before some other new ‘hit song’ (okay songs like kolaveri di and the likes are NOT hits. Not according to my definition of ‘hit’ anyway) made its way to the top of the charts. Songs remained hits till you knew every word (chorus included) by heart because of them being played repeatedly on tv. Because you would rush from your bedroom when it came on tv every.single.time. NOT because you had it on your ipod which was glued to your ears 24×7.But now, there is an excess of mindless songs, with no meaning, hin-glish words that just don’t fit it, just a catchy tune, the sole purpose of which is to put you in a peppy mood when you are in the gym or at a club half drunk, and people trying to cash it on its ‘success’ which of course lasts only a week before the next wave of mindless songs set in.

Granted, a few gems sneak in here and there, but honestly they are not everlasting gems – definitely not like the ones we had before!  What can I say, looks like I am a true 90’s girl! 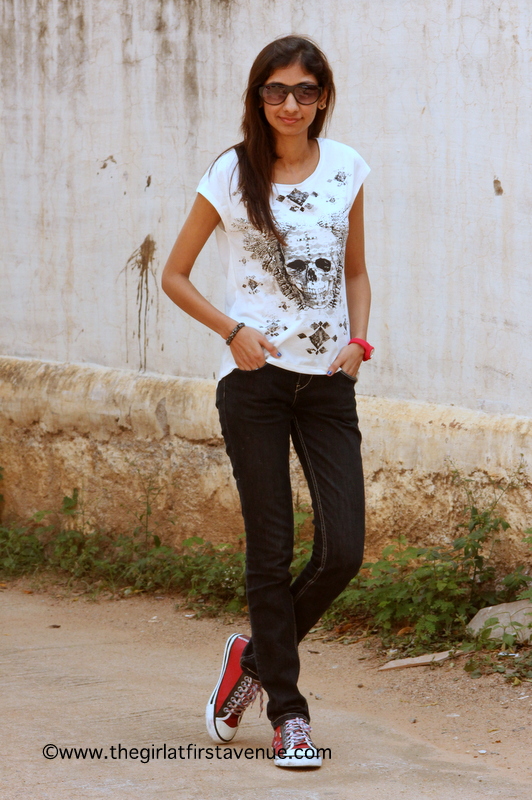 This little guy looked pretty keen to become a fashion blogger what with his repeated requests to click one more photo of him. Making his dreams come true. Am a fairy godmother like that.